Recent reports from the Intergovernmental Panel on Climate Change (IPCC), in its sixth assessment round, offer a sobering assessment of the climate-related challenges facing small island developing states ( SIDS). Indeed, UN Secretary-General António Guterres called the reports a shameful record, saying “we are on the fast track to climate catastrophe.” This note reviews the risks for SIDS highlighted in the IPCC report on “Impacts, Vulnerability and Adaptation” and reviews opportunities for earlier action, highlighting advances in anticipatory action by the UN and other partners.

According to the IPCC, the increase in extreme weather and climate events has exposed millions of people to acute food insecurity and reduced water security, with the greatest impacts among small island communities. Groundwater availability in SIDS is also threatened by climate change. These impacts will only worsen in the future. Above a global warming level of 1.5°C, freshwater resources will decline and pose potential hard limits for small islands. At a global warming level of 2°C or more, food security risks from climate change will be more severe, leading to malnutrition and micronutrient deficiencies concentrated in sub-Saharan Africa, South Asia, Central and South America. South and in the small islands. On top of that, sea level rise poses an existential threat, jeopardizing the very existence of certain communities and cultures in SIDS.

Fig. 1 Projected percentage of current population in selected small islands occupying vulnerable land (the number of people on earth who may be exposed to coastal flooding, either by falling permanently below the mean high water mark or by falling temporarily below below the local annual flood height (Source: IPCC, 2022).

Risks are not driven by hazards alone, but by changes in vulnerability and exposure. Population growth and assets along the coasts compound the challenges. Globally, demographic changes in cities and low-lying settlements will result in approximately one billion people being exposed to coastal-specific climate hazards in the medium term in all scenarios, including small islands.

There are a variety of response options to deal with these risks and impacts. As the global community urgently needs to reduce greenhouse gas emissions, coastal communities can consider protection, accommodation, and early and planned relocation. According to the IPCC, these responses are most effective if they are combined and/or sequenced, planned well in advance, aligned with socio-cultural values ​​and development priorities, and supported by inclusive community engagement processes. However, even with maximum possible adaptation, tropical agricultural deltas and urban atolls will face high limits due to sea level rise. Adaptation measures will not be sufficient and loss and damage will occur. Soft limits to adaptation, resulting from financial and other constraints, have already been reached in low-lying coastal areas of small islands. The funding available is further limited by the crisis, such as COVID-19. In a “post-pandemic world”, a Category 2 cyclone may resemble a Category 5 cyclone, due to limited national resources to respond to it.

It is therefore essential to ensure that funding is available early so that communities can take action to minimize shocks. It is also essential that the humanitarian community engages in climate change discussions and policies to help better address the loss and damage that will increasingly occur in SIDS. In recent years, progress has been made in both areas with the development of “anticipatory action” or “forecast-based finance”. Already in 2014, the United Nations General Assembly had asked the humanitarian system to move towards a proactive approach to prevent and reduce human suffering. There are now pilot anticipatory action projects in more than 60 countries, including Haiti, the Dominican Republic and Fiji.

Traditionally, humanitarians respond to disasters by conducting a damage or needs assessment and then seeking funding. Anticipatory action (AA) is not based on impacts but on risks. To be successful, anticipatory action requires:

When a pre-agreed trigger is reached, based on a forecast, funding is released so that communities or humanitarian partners can take action before shocks. By making payments early, AA helps remove some of the soft limits that communities face. 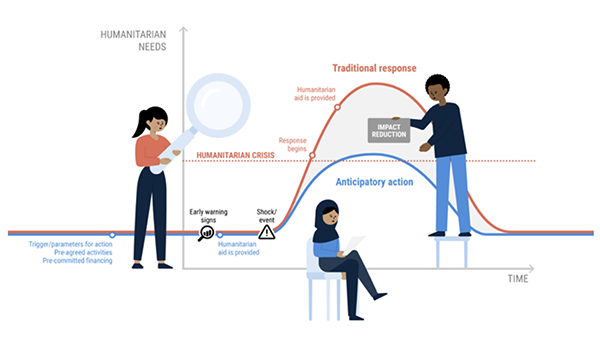 Since 2018, the United Nations Office for the Coordination of Humanitarian Affairs (OCHA) has been working with donors, implementing organizations (such as WFP, FAO, UNICEF, IOM, UNFPA and IFRC ), governments and experts to promote change towards a more proactive approach. humanitarian system. This included an initial commitment of up to $140 million from the Central Emergency Response Fund (CERF) to develop 12 pilot anticipatory response frameworks for different shocks including drought, floods, cyclones and epidemics. of communicable diseases. As of July 2020, 2.2 million people in Somalia, Ethiopia and Bangladesh have been reached through early action. CERF had spent just over $60 million on these pilot projects, less than 6% of its total expenditures over the same period. OCHA also finalized Advance Action Frameworks in six other countries (Bangladesh, Burkina Faso, Nepal, Niger, Philippines and Malawi), covering more than 2.3 million people and providing $58.5 million in pre-funding. arranged for action, if triggers are reached. OCHA’s pilot projects have demonstrated that anticipatory action is rapid, efficient, effective and dignified humanitarian action.

The anticipatory approach could be further piloted and scaled up to cover all SIDS. However, steps should be taken to improve forecasting, activities and funding. We need to invest in data collection to help better predict all the shocks that communities face. Hazards such as cyclones are increasingly becoming multinational events. Frameworks for action need to be developed across countries and regions, and pre-agreed activities need to be coordinated across large geographic areas. We also need to better identify actions that can help address and minimize non-economic losses. Most humanitarian efforts have focused on the loss of human life rather than the loss of cultural assets or ecosystem services, important issues in discussions of climate change. Furthermore, more funding will clearly be needed if we are to reach all communities before shocks occur. Pre-determined benchmarks or triggers could be developed not only for cash distribution, but also for top-up. Donors could agree to automatically replenish funds such as CERF based on triggers related to climate shocks.

Finally, the humanitarian system cannot act alone. Development planning must also be more proactive. Social safety nets in times of crisis need to be further strengthened. Decadal predictions or long-term changes in extreme event trends could be used as triggers to provide payments for adaptation measures. Through its work developing the Extreme Climate Facility, the African Risk Capacity is leading such efforts.

In September 2021, 135 Member States and humanitarian and other actors came together to highlight the need to further mainstream anticipatory action – a significant broadening of political support. AA will not provide all the solutions to the challenges facing SIDS, but when combined with other interventions or as part of a set of multi-level risk reduction efforts, it could be a useful tool to help minimize losses from the worst climate shocks.

This article was written for the Perry World House 2022 Global Change Colloquium, “Islands on the Climate Frontline: Risk and Resilience,” and made possible in part by a grant from the Carnegie Corporation of New York. The views expressed are solely those of the author and do not reflect those of Perry World House, the University of Pennsylvania, or the Carnegie Corporation of New York.

‘China threat’ emerges in elections from UK to Australia