After all these months of waiting and theorizing, we finally have a good look at what the Island Sanctuary will look like in Final Fantasy XIV. Here we have all the details of the Live Letter 72!

A whole new island (of yours)

The Island Sanctuary will be released with Final Fantasy XIV: Buried Memory patch 6.2 on August 23, 2022. The feature will, as advertised, be quite extensive and will offer a different type of gameplay from the usual adventurer routines of Final Fantasy XIV. Instead of braving raids and dungeons, you get your own island to explore and slowly transform into paradise. And while it’s instanced content, meaning all players can progress on their own, it’s not the instanced housing some were hoping for.

Think of it more as… Final Fantasy XIV meets Stardew Valley. While the feature itself isn’t as extensive as some obvious comparisons, it’s just meant to relax. And it’s also optional! You can commit to it if you just want to mine the rewards, if you just want a space to hang out with your friends, or something to do in between content. The rewards themselves will largely be cosmetics like new outfits, a mount, minions, and the usual purse of Materia and crafting materials. So it will be a great way to deepen your pockets a bit while doing some relaxing farming.

You can visit other players’ islands and invite your own. Maybe you can finally host that private party on the beach, host Free Company meetings, or whatever comes to mind. I’m sure Roleplayers will have a blast. Because the island sanctuary is huge. From what was shown live, it easily compares to the size of some of the newer areas. It may even be bigger than that. Think of the scale of something like The Sea of ​​Clouds but fully connected and with the same verticality, while being even more detailed than some modern areas.

The good life, the simple life

When you arrive on the island, there is virtually nothing but wilderness and an army of helpful Mammets at your disposal. What is your mission here? Well, we’re not sure what the story surrounding the shrine will look like. But director and producer Naoki Yoshida mentioned that the tutorial would easily take two to three hours. And once you complete it, you have pretty much free rein on how to progress your island.

But what do you actually do? The Yoshida showed what appeared to be the first few sections of the tutorial. You start by gathering materials on the island, for this you switch between modes in the new Island Sanctuary menu. Don’t worry, crafters and gatherers aren’t required to advance this content. But you need to complete the 6.0 Endwalker quest to unlock the island shrine.

Once you have gathered enough supplies from the wild, you can build the beginnings of your base at a pre-determined location. Here you can then access the providers and probably also the market system which unfortunately we could not see. Once you’re settled, you can expand your operations by building a small farming plot. You must plant and maintain your fields by selecting the correct mode from the Island Sanctuary menu. Later, you can even unlock skills that will allow your Mammet companions to take care of these tasks without your intervention.

Completing any task on the island shrine will earn you shrine experience points which, in turn, will affect your rank in the island shrine. We don’t know exactly what impact this ranking has yet, but we can only assume that it’s the primary way to unlock new professions and abilities to expand your island even further. For example, the fruit you plant can then be turned into food for animals and monsters. Yes, you can capture all kinds of monsters and animals on the island. Yoshida himself captured an Opo-Opo on the island, built a pen for it, and began feeding it. Animals and monsters have affection levels towards you, depending on how you treat them. You can even give them nicknames if you want. Capturing animals will allow you to get materials from them, it was also mentioned that you can breed them and capture rare variants of different colors. But we haven’t seen more of that yet.

By the way, to capture animals, gather materials or build things. You need to craft and equip tools that will exist in a separate menu, like all the resources you gather on the island. There also seems to be an upgrade path for these, so you can gather resources more efficiently or get rarer materials. Either way, once you’re settled, you can then create what appear to be workshops and a windmill that are likely used to further process your materials. Note that some crafts can be done instantly and some can take up to 12 hours.

We didn’t see it in the live letter, but the island sanctuary will come with its own economic system. For example, the separate Sanctuary market will ask for a certain resource for a higher price. We can’t say in what kind of time windows this works, but we can only assume these will change with daily or weekly resets. So, for example, if the market is asking for apples, you can modify your whole operation to produce more apples and sell them at a higher price. And these systems will also not be affected by the actions of other players. 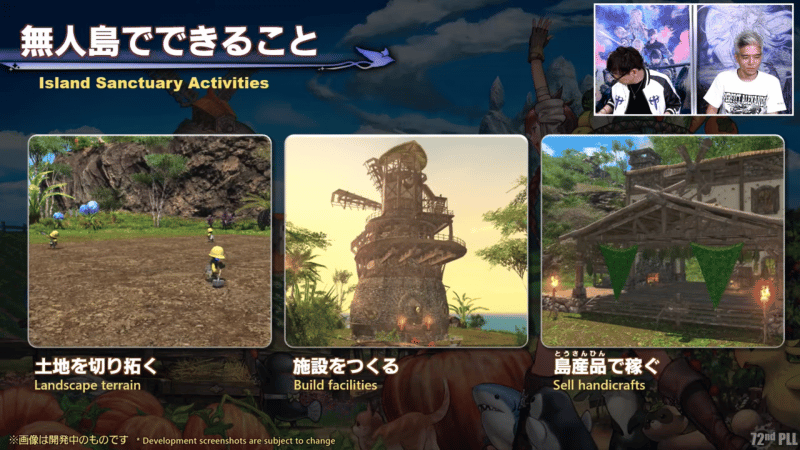 Why the Island Sanctuary?

Some of the most content focused Final Fantasy XIV players and I guess people who have come from other MMOs might now be wondering why this content exists? It doesn’t quite fit the current Final Fantasy XIV landscape and I’m sure a lot of people would have preferred more combat content in terms of raids or another large instance like Bozja instead. But you should think of it more as an investment in the future of XIV.

A long time ago, endgame content was all about leveling up alternate jobs, grinding your tomestones, maybe picking up some crafting, and doing your weekly raids. Back then, we also had multiple dungeons per patch instead. Now Final Fantasy XIV is a very different game, many players log in almost daily and don’t even touch any of the tasks I just listed. And the direction is to turn Final Fantasy XIV into even more of a theme park. You log in and do what your heart desires.

And the Island Sanctuary on paper is just more to do if you want. Unlike the Restoration of Ishgard we had in Shadowbringers, there are also no scoreboard related rewards this time around. As Yoshida said, the island shrine is a different kind of content for players to just hang out and relax. And it’s a feature they plan to update and refine with every Endwalker patch. Whether this is a good thing or not, we can only tell in the long run.

But since the pandemic began, Final Fantasy XIV has become much more than just an MMORPG where you kill things by pressing lots of buttons in the right order. Giving players more space to express themselves and well, live in the world of Final Fantasy XIV is what has already proven the way forward when it comes to retaining players and growing audiences.

Because Final Fantasy XIV is already strange because it’s been almost 12 years since its initial launch and 9 years since the relaunch with A Realm Reborn. It’s an anomaly for a game that, deep in its life cycle, still manages to attract so many new players while retaining its already loyal player base. But who knows, maybe the island sanctuary will end up being a cute experience that we forget about in the next expansion or it could grow even beyond the Endwalker patch cycle.

Whatever happens, we’ll keep you posted. You can find a full summary of the latest LIVE Producer Letter here. And we’ll have deep dives and guides for Island Sanctuary and new Criterion Dungeon content here as soon as they launch. For more on Final Fantasy XIV, esports, and gaming-related topics, visit us here on ESTNN