The vehicle in question is BrightDrop’s EV600, among the latest offerings from one of many companies looking to electrify freight and deliveries in the United States. The GM subsidiary focuses precisely on the part of the delivery landscape most visible to the public: the last mile.

I began to notice with some concern the idling of delivery vehicles as packages move from the truck to the mailbox. The emissions, the exhaust, the obstacles they pose to cyclists braving my busy road: the machinations of modern deliveries can be heavy. And they can absolutely worsen the quality of life in cities. Electrifying these vehicles would reduce air and noise pollution, while reducing carbon emissions.

BrightDrop is still in its infancy. Launched in January 2021, the company has since produced both the EV600 van – designed to be roughly the size of a UPS van and a Mercedes Sprinter van – and an electrified container that would act as a middleman, moving quickly the packages from the warehouse to the van. and from the van to the mailbox.

BrightDrop’s vans arrive at the customer looking like an empty box.

He already has contracts with FedEx and Walmart. The first five BrightDrop FedEx vans were delivered to much fanfare last December, with more quietly joining the fleet in the months that followed.

The company’s rapid progress thus far accounts for the fastest development-to-production process in GM history; full-scale production of the EV600 is expected to begin in the last quarter of this year in Michigan.

That speed is due in part to the simplicity of the electric motor, which relies on the same Ultium batteries that GM uses in its many subsidiaries that are leaning more and more towards electric. BrightDrop was launched just as GM announced its goal of eliminating all gasoline and diesel cars and SUVs from its lineup by 2035.

This week, I took a look at what they’re working on and dig deeper into the company’s potential impact on how our packages make it to our doorsteps. While I’m certainly no expert on delivery vans, I can tell you that BrightDrop’s vision for the future is decidedly smoother and quieter than the vans that regularly idle on my busy street.

A streamlined crate for transporting boxes

Stepping into the cargo hold of an EV600, I was impressed with how streamlined it felt. Everything was designed with input from delivery drivers who get in and out of these trucks dozens of times a day, and have ergonomics in mind. I am fairly average height and was able to get into the Waltz through the passenger side door and out the back with ease. There’s no wasted space here, but the EV600 doesn’t feel claustrophobic at all.

The vans arrive at the customer looking like an empty box, said Stephen Marlin, BrightDrop’s account executive, who showed me around the Greenpoint warehouse where the vehicles had been installed. Then the customer, whether it’s FedEx, Walmart, or someone else, outfits the cargo space to their specifications.

Inside the EV600 I saw before my test drive in another van, the passenger side dash had a concave dimple cut out, which Marlin says is the precise size to fit a USPS box. (USPS is not a BrightDrop customer and has in fact pushed back against Biden administration encouragement to electrify more than a fraction of its vehicle fleet. But dare to dream. (FedEx, he said, has removed this clipping in its own version of the van.)

The van features dual charging ports, allowing drivers to slowly charge overnight (which most delivery fleets will be) up to the maximum range of 250 miles, or use the DC charging in case a longer trip might be needed. BrightDrop vans’ faster DC charging allows them to reach a range of approximately 160 miles in an hour. The touchscreen control panel on the dashboard offers options such as “charge now/charge later” to allow fleets to take advantage of off-peak on-demand charging.

Marlin noted that the vehicle is considered “oversized,” meaning 250 miles is farther than virtually any delivery driver should travel in a single day. But anything to reduce range anxiety in the potentially wary EV adopter!

From behind the wheel

After snooping around the back of the van on display in the sprawling warehouse where BrightDrop displays its wares, I came to the most fun part: climbing into the driver’s seat of one of the models parked outside.

I’m not a car enthusiast, let alone a van delivery guy, so maybe take that with a grain of salt. Corn! There are a number of cutting-edge features that make driving the EV600 both easier and more fun than the 1999 station wagon I learned on. The van uses haptic steering to keep the driver unsteady in the lane, as well as a haptic seat, which vibrates when a pedestrian or bicycle crosses in front of the van or in the blind spot. Encouraging, for those of us who are unlikely to drive regularly – and also for pedestrians and cyclists, who are increasingly at risk on the roads.

The EV600 is quiet. The start-up doesn’t produce a rumble that will snap you out of your daydream like the average FedEx truck. However, as required by the National Highway Traffic Safety Administration, the van emits a low noise to alert pedestrians and cyclists to its presence. It felt a bit like the opening notes of an opera: both enjoyable and decidedly different from any automobile I’ve encountered before. 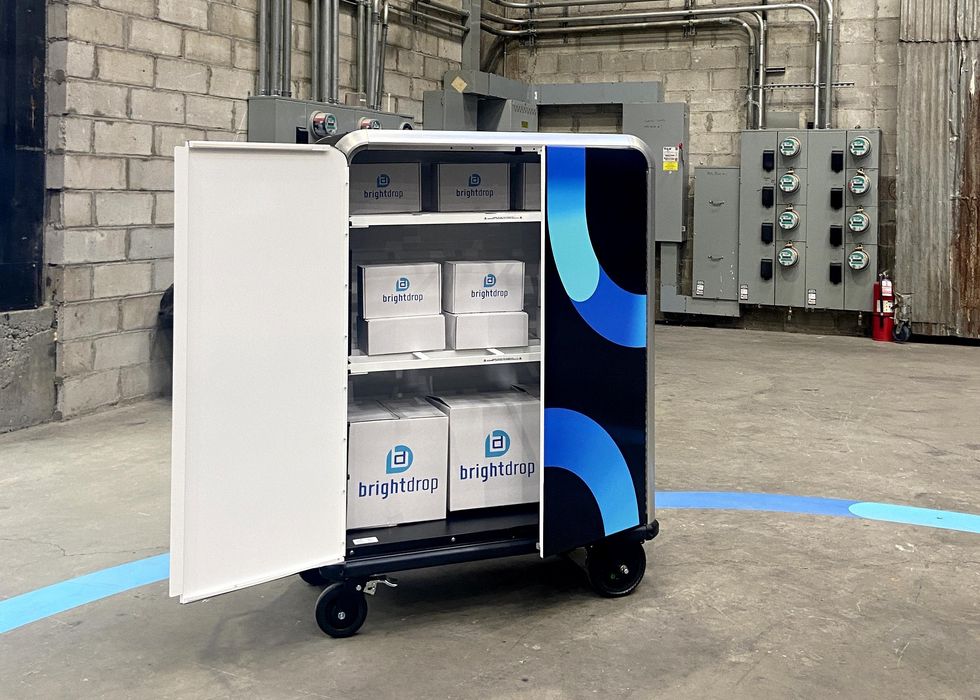 This electrified container would act as a middleman, quickly moving packages from warehouse to van and from van to mailbox.Photo: Lisa Martine Jenkins/Protocol

It was also my first experience of one-pedal driving, in which releasing the accelerator pedal quickly slows the van to a stop without needing to press down on the brake pedal at all. This is possible because electric vehicles rely on regenerative braking, which allows the electric motor to act as a generator and charge the battery as it slows down. With single-pedal driving, this regenerative braking becomes nominally more effective and can potentially extend a vehicle’s maximum range by several miles.

That said, I found that one-pedal riding went against the decade of muscle memory in my right foot. I turned the setting off after a few blocks, the extra few miles of range are cursed. Marlin told me that the vans are set up to replicate the experience of a conventional delivery van as closely as possible so that the transition is easy for drivers, and I guess I’m not the only one who wants to take a little gasoline -to slow down the exercise.

From my perspective, BrightDrop succeeded in this regard – the ride was fairly smooth, apart from a few wider right turns than I’m used to. The vibrating seat alerted me to a bicycle delivery driver slipping between me and a parked car, which was both surprising and comforting, but otherwise not unlike riding a U -Haul. A very smart, very stylish and very quiet U-Haul. I can’t imagine a delivery driver bristling to make the transition from a noisy, polluting old van to the electrified version of BrightDrop.

As for me: I’m happy to report that there were no collisions, although I’m pretty sure I held up a city bus that would probably have cruised the nasty streets of Greenpoint with more finesse.